Join 108 other subscribers
Follow Think About These Things on WordPress.com

A picture worth a thousand words…

Since the end of the Great Recession in 2008, the United States has seen an ever widening gap between the economic classes of haves and have nots. Just 5 years out from the recession, a stunning 95 percent of income growth since the recovery started has gone to the super-wealthy. Looking closer, it is really a tiny fraction—the 1 percent of the 1 percent—that has taken a big share of the nation’s wealth.

This wealth gap we see today has really skyrocketed since about the 1980s and certainly in the past decade, decade and a half. In cities that inequality is even greater. Inequality in New York City is like Swaziland. Miami’s is like Zimbabwe.

We have reached an inflection point wherein for the first time in a century the top 10 percent of Americans control more than half of all income with a forecast that this will continue to rise in the years to come.

Many would agree that this widening economic gap between the have and have not’s produced the political backlash that propelled Donald Trump to power.

The current day rise of populist movements across United States and Europe…are these novel phenomenons or is it just history repeating itself?

To answer this question, Will and Ariel Durant in their amazing book “The Lessons of History,” make us look through the lens of history. They provide an account of two societies and how they reacted to societal inequality in the past and the huge consequences thereof.

“…the disparity of fortune between the rich and the poor had reached its height, so that the city seemed to be in a dangerous condition, and no other means for freeing it from disturbances… seemed possible but despotic power” described Plutarch.

“The poor, finding their status worsened with each year— the government in the hands of their masters, and the corrupt courts deciding every issue against them— began to talk of violent revolt. The rich, angry at the challenge to their property, prepared to defend themselves by force.”

It appeared that Athens was rapidly devolving into civil unrest and on the path of rapid decline. When all seemed lost, hope arrived in the form of an aristocrat businessman, Solon, who became the archon (chief magistrate) of Athens and changes it all, thus saving Athens from itself.

Having achieved success and notoriety from the successful accession of Salamis Island to Athens, moderate elements secure the election of Solon, a businessman of aristocratic lineage, to the supreme archonship. His appointment marked a turning point in the history of the Athens city-state. Realizing the tensions between the economic classes, rivalries among the aristocrats, and a lack of moral ethics that spread beyond the boundaries of the Athens region. Solon would soon introduce sweeping reforms and legislation to stabilize both the Athenian economy and the morale of the people.

“He devaluated the currency, thereby easing the burden of all debtors (though he himself was a creditor); he reduced all personal debts, and ended imprisonment for debt; he canceled arrears for taxes and mortgage interest; he established a graduated income tax that made the rich pay at a rate twelve times that required of the poor; he reorganized the courts on a more popular basis; and he arranged that the sons of those who had died in war for Athens should be brought up and educated at the government’s expense.”

The rich protested that his measures were outright confiscation; the radicals complained that he had not re-divided the land; but within a generation almost all agreed that his reforms had saved Athens from revolution.

His reforms ushered in the Golden Age of Greek Civilization with the introduction of democracy in 508 B.C. and great strides in government, mathematics, science, medicine, philosophy and arts in the next 100-200 years to come.

Solon is thus considered as one of the Seven Great Sages of Greece.

In contrast, the Romans handled it very differently. “The Roman Senate, so famous for its wisdom, adopted an uncompromising course when the concentration of wealth approached an explosive point in Italy.

The result: “a hundred years of class and civil war between the haves and have-nots. Tiberius Gracchus, an aristocrat elected as tribune of the people in 133 B.C. , proposed to redistribute land by limiting ownership to 333 acres per person, and alloting surplus land to the restive proletariat of the capital. The Senate rejected his proposals as confiscatory. He appealed to the people, telling them, “You fight and die to give wealth and luxury to others; you are called the masters of the world, but there is not a foot of ground that you can call your own.” The Roman Senators clubbed him to death. A decade later, his younger brother, Gaius Gracchus, attempted similar legislation,s and suffered the same fate. After 100 years, Julius Caesar attempted a compromise, but was cut down by the patricians (44 B.C.) after years of civil war thus signaling the end of the Roman Republic.

Clearly no one in the Roman Republic had read the Athenian experience which occured some 300 years before.

It was not till 30 B.C. that finally Octavius established the “Principate” that maintained the Pax Romana- an era of peacebetween the classes as well as among the states within the Imperial frontiers for the next 210 years (30 B.C. – A.D. 180).

“After the breakdown of the political order in Western Roman Empire in 476 A.D., centuries of destitution was followed by the slow renewal and re-concentration of wealth, partly in the hierarchy of the Catholic Church. In one aspect the Reformation was a redistribution of this wealth by the reduction of German and English payments to the Roman Church, and by the secular appropriation of ecclesiastical property and revenues. The French Revolution attempted a violent redistribution of wealth… from the aristocracy to the bourgeoisie (middle class).”

What does this all mean for today?

The Durant’s explain the cause and recurring nature of economic inequality in “The Story of Civilization” through the lenses of history.

“History, according to Karl Marx is economics in action -a contest among individual, classes, groups, and states for food, fuel, materials and economic power.”

“These experiences of the past (like in Greece, Rome) leaves little doubt that every economic system must sooner or later rely on some form of the profit motive to stir individuals and groups to productivity. Substitutes like slavery, police supervision, or ideological enthusiasm prove too unproductive, too expensive, or too transient. Normally and generally men are judged by their ability to produce – except in war, when they are ranked according to their ability to destroy.”

“Since practical ability differs from person to person, the majority of such abilities, in nearly all societies, are gathered in a minority of men. The concentration of wealth is a natural result of this concentration of ability and regularly recurs in history. The rate of concentration varies (other factors being equal) with the economic freedom permitted by morals and the laws.

“Despotism may for a time retard the concentration of wealth; democracy, allowing the most liberty, accelerates it. … In progressive societies, the concentration may reach a point where the strength in number of the many poor rivals the strength of ability in the few rich; then the unstable equilibrium generates a critical situation, which history has diversely met by legislation redistributing wealth or revolution redistributing poverty.” A revolution triggers when one of the most dangerous human forces ‘an angry man with nothing to lose” is unleashed when this sense of inequality manifests in society.

The Durant’s propose that pure capitalism eventually collapses because of progressive inequality and revolution, while pure socialism eventually fails because it does not produce adequate wealth to sustain itself. The fall of the Communist Soviet Union is an example that few people will work without a profit motive. Long-term peace and prosperity seems to be a balance between capitalism to effectively create wealth and socialism to provide equal distribution. “Talent, intelligence, self-discipline, and an appetite for risk” must be rewarded for economies to grow, but societies must maintain a reasonable opportunity for all to succeed in life.

“The concentration of wealth is natural and inevitable and is periodically alleviated by violent or peaceable partial redistribution. In this view, all economic history is the slow heartbeat of the social organism, a vast systole and diastole of concentrating wealth and compulsive redistribution” the Durant’s conclude.

They mention that the government of the United States, in 1933-52 and from 1960-65, followed Solon’s peaceful methods, and accomplished a moderate and pacifying redistribution; perhaps somebody had studied history.” 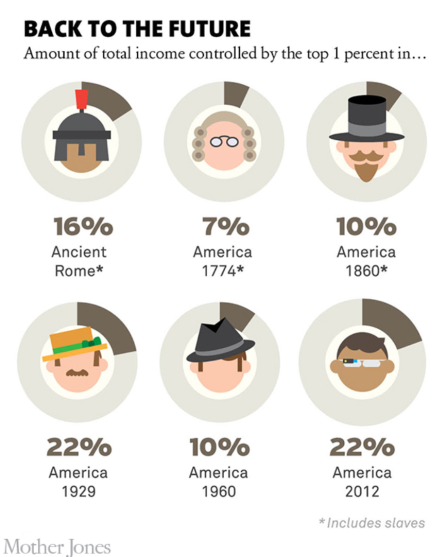 This re-distribution occurred in the United States after the World Wars with initiatives like the Social Security Act/ GI bill to support education of World Ward returnee’s/ Medicare, etc. The upper class in America cursed, complied, and resumed the concentration of wealth” to be where we are today.

As we hurtle towards rising inequality is it possible to calm this heartbeat of economic inequality without violence before time runs out? I believe so.

Is there going to be some redistribution of wealth in the United States through ongoing initiatives in health care overhaul, tax reforms, infrastructure spending, education reform (New Learning: Is My Cup Empty?), and help avert a crisis which history clearly indicates we are heading towards? Or will we have blood in the streets (read spurt in gun violence, opioid epidemic) before re-distribution occurs?

Someone aptly said that the hiring of a historian should be an important hire at the White House and the Senate/ House, as history repeats itself. If we forget history we are more apt to repeat it with sometimes-disastrous consequences to the nation.

The question is whether someone is listening to the heartbeat of history as we look towards the future horizon!!

Will and Ariel Durant- The Lessons of History

Reflections of a Life's Journeyman View all posts by prodhanparthak

One thought on “The Cycle of Wealth”