Join 108 other subscribers
Follow Think About These Things on WordPress.com

Paulo Cohelo, the Brazilian author, whose novel ‘The Alchemist’ has been translated into 81 languages as the simple story has resonated with countless people. Here is a short narrated by him about the Secret of Happiness in ‘The Alchemist.’

“A merchant sent his son to learn the Secret of Happiness from the wisest of men. The young man wandered through the desert for forty days until he reached a beautiful castle at the top of a mountain. There lived the sage that the young man was looking for.

However, instead of finding a holy man, our hero entered a room and saw a great deal of activity; merchants coming and going, people chatting in the corners, a small orchestra playing sweet melodies, and there was a table laden with the most delectable dishes of that part of the world.

The wise man talked to everybody, and the young man had to wait for two hours until it was time for his audience.

With considerable patience, he listened attentively to the reason for the boy’s visit, but told him that at that moment he did not have the time to explain to him the Secret of Happiness.

He suggested that the young man take a stroll around his palace and come back in two hours’ time.

“However, I want to ask you a favor,” he added, handing the boy a teaspoon, in which he poured two drops of oil. “While you walk, carry this spoon and don’t let the oil spill.”

The young man began to climb up and down the palace staircases, always keeping his eyes fixed on the spoon. At the end of two hours he returned to the presence of the wise man.

“So,” asked the sage, “did you see the Persian tapestries hanging in my dining room? Did you see the garden that the Master of Gardeners took ten years to create? Did you notice the beautiful parchments in my library?”

Embarrassed, the young man confessed that he had seen nothing. His only concern was not to spill the drops of oil that the wise man had entrusted to him.

“So, go back and see the wonders of my world,” said the wise man. “You can’t trust a man if you don’t know his house.”

Now more at ease, the young man took the spoon and strolled again through the palace, this time paying attention to all the works of art that hung from the ceiling and walls. He saw the gardens, the mountains all around the palace, the delicacy of the flowers, the taste with which each work of art was placed in its niche. Returning to the sage, he reported in detail all that he had seen.

“But where are the two drops of oil that I entrusted to you?” asked the sage.

Looking down at the spoon, the young man realized that he had spilled the oil.

“Well, that is the only advice I have to give you,” said the sage of sages. “The Secret of Happiness lies in looking at all the wonders of the world and never forgetting the two drops of oil in the spoon.”

How do we balance ‘what we have to do’ versus ‘what we want to do?’ The oil is a metaphor for the material possessions or day-to-day actions – the ‘we have to do’ things which can sometimes which may easily detract us from the immense beauty around.

As the graph below indicates more money beyond a certain level does not lead to more happiness. In the United States, the percentage of people who considered themselves ‘very happy’ has plateaued since the 1950s despite incremental growth in income ever since. In other words more money beyond a certain degree does not seem to increase overall happiness. 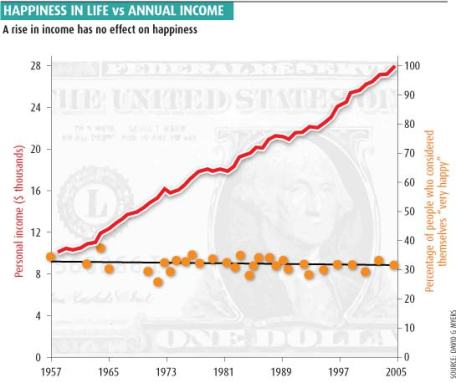 In other word, the question to then ask is what does money, once some of the basic needs are fulfilled, give to a person?

That brings us to something called the ‘fulfillment curve’- a dynamic and not a static concept.

As a kid, when we earned $30 at the lemonade stand, we were on top of the word, mentally as happy as can be. However, the same earned $30 when we have a rent to pay at the end of the month does not have the same connotation- we need more to just survive. As we progress in our career’s we buy our first house and a car so we do not have to rent or take the bus/ train overtime we have to go somewhere. Money has bought for us a level of ‘comfort.’ With some money, we look to but a Lexus and a bigger house (Luxury) even though we would be OK with the house and car we have now. Then we reach a point when more money is not going to get us anything but leads to extravagance.

In other words, MONEY gives us the DEGREE’s OF FREEDOM- freedom to do the things we may not be able to do due to constraints on our time. It is not to say that we do not need any money.  We know that our level of financial security does indeed affect our emotional and psychological well-being as shown in the ‘fulfillment’ curve.

A good example would be the famed ‘Oracle of Omaha’- Warren Buffet- one of the richest person in the world- his net worth is more than the GDP of many countries. Plotting him on the ‘fulfillment’ curve, more money will not give him more happiness. However, he has figured how to go even higher in the fulfillment curve instead of going down in extravagance. The money only provides him with time and the degree’s of freedom to do other things he loves to do and give his life purpose and meaning.

Once, when asked how to get smarter, the Oracle held up a stack of papers and said, “read 500 pages like this every day. That’s how knowledge builds up, like compound interest.” Buffett estimates that he spends 80 percent of his waking day reading at work (financial statements, journals, reports) and at home (newspapers and books). Something he loves and his riches allow him to do.

Buffett is one of the world’s biggest philanthropists. He has pledged to give away 99 percent of his fortune during his lifetime and is actively seeking this goal. “If you’re in the luckiest 1 percent of humanity, you owe it to the rest of humanity to think about the other 99 percent.” he says.He is also famously frugal, so it all works out. Not only does Mr. Buffett live in the same house he bought in 1958 for $31,500 (ironically, it costs significantly more to live next to him). He also likes to stay sharp by playing Bridge (which, like Monopoly, takes a notoriously long time to finish). In fact, Buffett likes Bridge so much that he can sometimes be found in an Omaha strip mall, paying $7 to play against retirees. If you can believe it, he’s a pretty good ukulele player and even writes his own songs.

Here is Buffet talking about what makes him fulfilled…

Here is him wishing the Chinese a ‘Happy New Year’ and saying “Your country has accomplished amazing things, and the best is yet to come” …’its time to blow your horn’

time for another story….

One day a fisherman was lying on a beautiful beach, with his fishing pole propped up in the sand and his solitary line cast out into the sparkling blue surf. He was enjoying the warmth of the afternoon sun and the prospect of catching a fish.

About that time, a businessman came walking down the beach trying to relieve some of the stress of his workday. He noticed the fisherman sitting on the beach and decided to find out why this fisherman was fishing instead of working harder to make a living for himself and his family. “You aren’t going to catch many fish that way,” said the businessman. “You should be working rather than lying on the beach!”

The fisherman looked up at the businessman, smiled and replied, “And what will my reward be?”

“Well, you can get bigger nets and catch more fish!” was the businessman’s answer.

“And then what will my reward be?” asked the fisherman, still smiling.

The businessman replied, “You will make money and you’ll be able to buy a boat, which will then result in larger catches of fish!”

“And then what will my reward be?” asked the fisherman again.

The businessman was beginning to get a little irritated with the fisherman’s questions. “You can buy a bigger boat, and hire some people to work for you!” he said.

“And then what will my reward be?” repeated the fisherman.

The businessman was getting angry. “Don’t you understand? You can build up a fleet of fishing boats, sail all over the world, and let all your employees catch fish for you!”

Once again the fisherman asked, “And then what will my reward be?”

The businessman was red with rage and shouted at the fisherman, “Don’t you understand that you can become so rich that you will never have to work for your living again! You can spend all the rest of your days sitting on this beach, looking at the sunset. You won’t have a care in the world!”

The fisherman, still smiling, looked up and said, “And what do you think I’m doing right now?”

As the year wind down…lets introspect on where we are on the fulfillment curve and what we can do to go up?

Reflections of a Life's Journeyman View all posts by prodhanparthak

2 thoughts on “The two drops of oil”